Every summer, more than 6,000 children, youth and adults who are living with disabilities attend one of Easter Seals’ accessible summer camps across the country. These often life-changing summer camps provide participants with opportunities to enjoy many typical fun summer camp experiences and take on new ones they may not have had the chance to do before. Camps help participants build their skills, confidence, and life-long friendships; and empower them to see their talents and abilities in new and exciting ways. 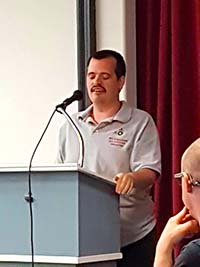 Krystian S. was born prematurely and didn’t come home for the first time until he was 5 months old. The doctors had him on 100% oxygen for the first week of his life but he didn’t absorb all the oxygen and they didn’t know why. He was subsequently diagnosed with an intellectual disability.

When he was about 4, Krystian was diagnosed with OCD and ADHD. He was an active little boy and needed structure. He had to stay busy. So, it was propitious that his family heard about Easter Seals camp. Krystian said, “I went to Camp Winfield [in BC] and I loved pulling pranks on camp counselors.” He goes on to say, “I really had an interest in self-advocacy” after going for a few years. Krystian had leadership qualities so when he was 19, he went to Easter Seals’ Camp Squamish – located in Brackendale, BC – for 2 years in their Leader-in-Training camp where he further developed his leadership skills.

“I loved helping to organize the activities and thanks to Easter Seals, I practice what they have taught us in my everyday life today.”

Now, at the age of 29, with the skills that Easter Seals camps taught him, Krystian now exercises his leadership skills in his own community. He organizes 2 to 3 fundraisers every year and runs his own newsletter business called The Kamloops Self Advocate newsletter. The newsletter focuses on disability awareness, success stories and inclusion for all that are written by people with diverse abilities. This is where he really puts his self-advocacy skills to work. Krystian humbly credits Easter Seals for contributing to his success, “If it wasn’t for the training and structure I received from Easter Seals, my dream wouldn’t have been possible.”