Greg the Great. Greg for short.

After working as missionaries in South Africa for five years, Greg Reddekopp and his wife Amy were demanded to leave. Unable to give him the medical attention that he required to treat an infection, doctors told Greg that if he stayed South Africa, he would likely face death.

Greg returned to Canada and now lives in Outlook, Saskatchewan – an appropriate name for a town, as his whole outlook has changed. For the past 12 years, Greg has been living with a debilitating chronic illness.

Unable to continue his missionary work in South Africa, Greg has found a new cause to support in Easter Seals Canada.

Father to four children between the ages of 11 and 16, Greg was first introduced to Easter Seals when his daughter Ellie began attending Camp Easter Seal in Manitou Beach, Saskatchewan.

Both Ellie and one of her brothers have autism.

“I have seen such an amazing change in her life and know that Camp Easter Seal was a big part of this change,” beamed Greg. “It is a place where she can be herself and find others who are like-minded.”

Greg and Amy hope that their son will be able to attend Camp Easter Seal when he is ready as well.

“I was so impressed with the staff, the facilities and the atmosphere,” Greg enthused.

As an advocate for the work that the camp does, Greg hopes to fund a child’s experience at Camp Easter Seal through his fundraising efforts for Drop Zone 2017.

“If just one parent and child benefit from this camp, this rappelling will be worth it,” exclaimed Greg as he reminded himself why he dropped from the tallest building in Saskatchewan.

His decision to rappel was not an easy one. On top of physical constraints, Greg is afraid of heights.

“I have physical limitations so rappelling was not easy,” he explained. Hoping his decision to brave the drop will also inspire others to participate next year, Greg assured, “If I can do it, anybody can do it!”

Fortunately for Greg, his fears were also quashed by the support that surrounded him in his town of Outlook. After holding a community garage sale, he was able to raise over $700 and surpass his fundraising goal. With the money that he has raised by selling WestJet raffle tickets, along with other generous donations, Greg was able to more than doubled his pledges. This made him the top individual fundraiser in Regina and put him in the top five individual fundraisers in all of Saskatchewan.

Greg’s biggest supporters remain his family, the brightest inspirations for his newfound outlook. 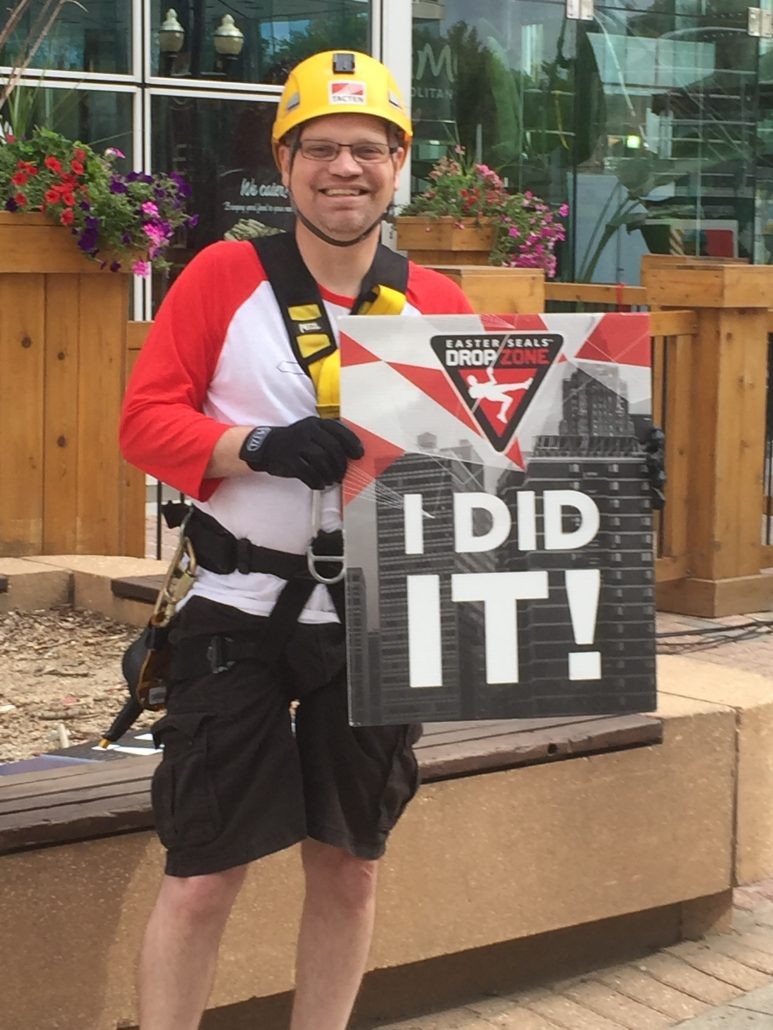