Andrew may not speak, but he has a lot to say. 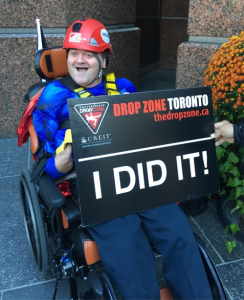 “I am a bit of a daredevil,” reads the voice on the output device of Andrew Nielsen, 44.

Living with cerebral palsy, Andrew is non-verbal and communicates with his voice output device and word board. Make no mistake: Andrew has a lot to say. He is currently in the process of writing a book about his life.

Andrew’s ability to push boundaries beyond conventional limitations extends to his physical abilities as well. Though he uses a wheelchair, Andrew will be participating in #DropZone2017 in Toronto on October 5.

In preparation for the big day, Andrew has been working with his occupational therapist and seating clinic to ensure that his rappel in the wheelchair will be safe and comfortable. He has also enlisted the support of his friends and family. Andrew’s father will accompany him to the training session.

Another one of his biggest supporters is his friend Todd Stephens, a counselor that he met at Easter Seals’ former Lakewood Camp in 1987.

Andrew attended Lakewood Camp until the age of 19, while Todd was a counselor at the camp for five years.

“I loved camp and was always excited to go to every year,” Andrew adds. “I would cry when I had to leave.”

Since meeting at camp, the Andrew and Todd kept in touch and have been friends for over 30 years — twice as long as Andrew has been married to his wife Amanda!

Todd tells us, “We were the Best Man at each others’ weddings.” 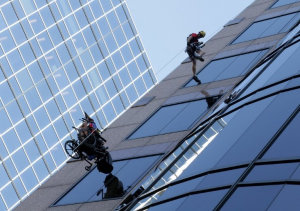 The pair spend every other weekend together going to Ti-Cat games, as Andrew is a huge fan of the Hamilton football team and never misses a home game.

It is hard to tell who is more excited for Andrew’s rappel: Andrew himself or Todd.

“Hopefully it can bring back some of the fun of Easter Seals Camp,” gushes Todd.

Drop Zone does emulate the confidence-building and risk-taking activities that Easter Seals Camps offer, allowing children living with disabilities to find out just how unstoppABLETM they are.

The confidence and friendships that Andrew built at Easter Seals Lakewood Camp have stayed with him forever.

“I went to Easter Seals Camp as a child and want to help children of this new generation experience camp as well,” Andrew explains his reasoning for braving the CREIT building in downtown Toronto. “This is my way to support Easter Seals.”

Andrew hopes to share stories about his life-long friends and memories at Easter Seals camp in his autobiography.