Assistive and adaptive technologies such as mobility equipment and communication devices, as well as home modifications such as ramps, elevators and ceiling track systems, enable individuals living with disabilities to maximize their abilities, exercise their independence, communicate and actively take part in their communities. Each year, thousands of people across the country benefit from the assistive equipment and adaptive technology supports provided by Easter Seals. 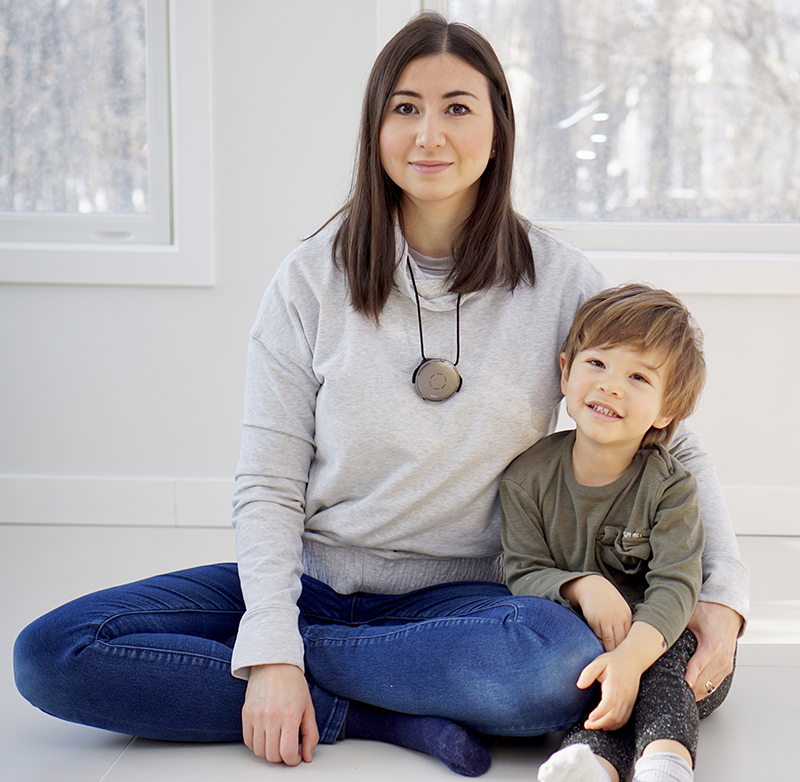 Benjamin with his mum.

My family is grateful for the support from the CIBC Children’s Foundation and Easter Seals Canada. When our son Benjamin was 2.5 years old, our world changed when we discovered that he has moderately severe, bi-lateral sensorineural hearing loss. Once we overcame the natural feelings of parental guilt in not recognizing the signs earlier, sadness for all the things he missed out on prior to his diagnosis, and the uncertainty about his future, we became driven to ensure that Benjamin exceeds every goal and overcome any obstacle placed before him.

Once Benjamin received his first hearing aids in June 2018, it was a life-changing moment for him and our family. Though Benjamin wears hearing aids at all waking hours of the day, he encounters daily challenging listening environments that impede his ability to understand clear speech which directly impacts his ability to acquire spoken language. These challenging listening environments include car rides, playgrounds, windy outdoor conditions, bicycle rides, restaurants, and other environments with imperfect acoustics. Knowing this information and the importance of early intervention, we wanted Benjamin to have access to as many speech and sound opportunities as possible.

Through the support of the CIBC Children’s Foundation and Easter Seals Canada, we acquired a Phonak Roger microphone. The microphone, when used in conjunction with his hearing aids, exposes Benjamin up to an additional 5,300 words per day compared to hearing aids alone (per Phonak’s research findings). The Roger microphone is worn by the speaker, or alternatively, if placed on a table, the device is able to distinguish the direction of the speaker, and voice is transmitted directly into his hearing aids, bypassing any environmental noise. The device is also able connect with Bluetooth so that he can listen to music directly into his hearing aids.

The Roger microphone has been an important tool for Benjamin as he loves the outdoors, no matter the weather. His favorite activities are helping his dad mow the lawn or collect leaves, riding his Power Wheels quad, shoveling snow, cycling with his family, and picking cattails in the fall. The Roger microphone provides Benjamin with the confidence to explore the outdoors and reduces his frustration by enabling him to keep up with the conversation. He can now hear his parents’ voices at a distance, without wind and other interference. It has also been immensely important for his safety. For instance, when he is riding on his noisy quad, we can communicate with him and instruct him to wait for us or pull over.

Without the Roger microphone, our 75 minutes/day commuting to/from daycare was a challenge as he could not hear us well despite the radio being turned off. We would have to constantly turn towards him so that he can hear better, which is not a safe practice. If I had wanted to share music with him through the car radio, he would not be able to clearly hear the words. With the Roger microphone, we make the most out of our long commute by singing non-stop and talking about the different objects we see on our ride. Benjamin has picked up many words on our car rides and can follow along with the lyrics when we sing. For example, the microphone allowed Benjamin to clearly hear Raffi sing his favorite song, “Wheels on the Bus”, through direct streaming into his hearing aids. Seeing Benjamin’s smile when the song gets streamed into his ears with the Roger system is precious.

The Roger microphone will grow with Benjamin and adapt to his needs as he gets older. We look forward to watching Benjamin surpass his goals and we cannot get enough of him talking. We don’t mind the “No” phase at all! Thank you again CIBC Children’s Foundation and Easter Seals Canada for your thoughtful contribution