RBC FOUNDATION EMPOWERING YOUTH LIVING WITH DISABILITIES WITH $300,000 FUNDING FOR EASTER SEALS PROGRAM TO HELP YOUTH BUILD SKILLS AND EXPERIENCE FOR FUTURE SUCCESS IN LIFE AND THE WORKPLACE

TORONTO, April 23, 2019 – Easter Seals Canada is pleased to announce a partnership with RBC Foundation to empower youth who are living with disabilities for future success in life and the workplace by providing them with opportunities to participate in skills development and training, coaching, mentoring, work placements and volunteer activities in five provinces. The Easter Seals – RBC 21st Century Skills and Leadership Program will serve youth – between the ages of 15 and 29 years old – in British Columbia, Alberta, Ontario, Newfoundland & Labrador, and Nova Scotia.

According to the 2017 Canadian Survey on Disabliity, one in five Canadians aged 15 years or older identify with having a disability. Challenges and obstacles they encounter in their daily lives limit their full participation in society, including in seeking and retaining meaningful employment. Youth who are living with disabilities in particular are at a higher risk of unemployment relative to the Canadian average.

Dave Starrett, Easter Seals Canada’s President and CEO said,“Easter Seals is committed to supporting youth who are living with disabilities address some of the challenges and barriers they are facing with the Easter Seals – RBC 21st Century Skills and Leadership Program. With RBC’s support, we will be able to create opportunities for youth to identify and build skills that are critical for success in life and work. They will be supported by Easter Seals staff and volunteers, and have the opportunity to gain experience and further hone their skills in practical work or volunteer placements in the community. Other than the immediate objectives, the program will also benefit participants in other ways, such as strengthening mental health and well-being, and reducing social isolation, while dismantling misconceptions, unconscious bias and stigma that still persist in many spaces and making Canada an even more accessible and inclusive society that recognizes and honours the skills and potential of Canadians of all abilities.”

The program builds upon the success of a similar pilot project that was held by Easter Seals in Ontario in 2018, which was also funded by RBC Foundation. 89% of participants in the pilot program said that it helped them build their skills and confidence. According to one participant, “This program has given me the chance to grow and learn to bring back to my community, home, school, employment and volunteer jobs!” The two-year $300,000 funding from RBC Foundation will enable Easter Seals to expand the program and offer the opportunity to youth in other provinces to also participate and benefit from the program.

“We’re excited to be working with Easter Seals Canada to deliver on the promise of RBC Future Launch,” said Valerie Chort, Vice President, Corporate Citizenship, RBC. “RBC Future Launch is a decade-long commitment to helping Canadian youth prepare for the jobs of tomorrow. We are committed to acting as a catalyst for change, bringing government, educators, public sector and not-for-profits together to co-create solutions to help young people better prepare for the future of the work through “human skills” development, networking, work experience, and mental wellbeing supports.”

RBC Future Launch is a 10-year, $500 million commitment to empower Canadian youth for the jobs of tomorrow. With a focus on networking, skills development, practical work experience and mental wellbeing supports and services, the initiative aims to help break down the barriers facing young people.

Easter Seals is Canada’s largest local provider of programs, services, and issues-leadership and development for the disability community. Since 1922, Easter Seals Canada and its provincial member organizations have been working to create a more inclusive and accessible society that includes and honours the contributions and potential of Canadians of all abilities. Easter Seals responds to the needs and aspirations of Canadians living with disabilities – and their families – by providing services that enhance their independence, well-being and quality of life; and by offering leadership that promote increased awareness, research and investment in disability issues. 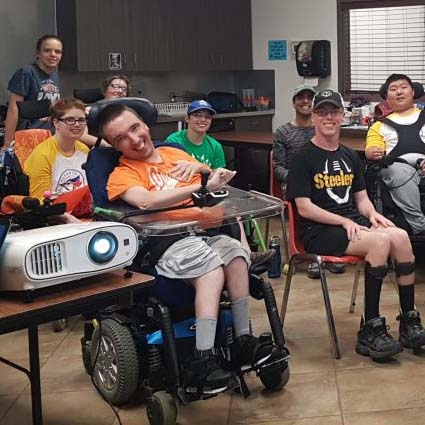 October 15, 2018, Ontario – In the summer of 2018, Easter Seals Canada and Easter Seals Ontario ran an exciting new pilot program, The RBC 21st Century Leadership Skills Pilot Program, at Camp Woodeden and Camp Merrywood in Ontario. The program seeks to address the significant educational attainment, employment and wage/income-earning gaps1 between persons living with disabilities relative to other Canadians (1Statistics Canada). A total of 43 participants took part in the pilot program which was generously funded by RBC Bank and was geared towards youth and young adults participants between the ages of 15 and 29 years old who are living with disabilities. READ MORE…